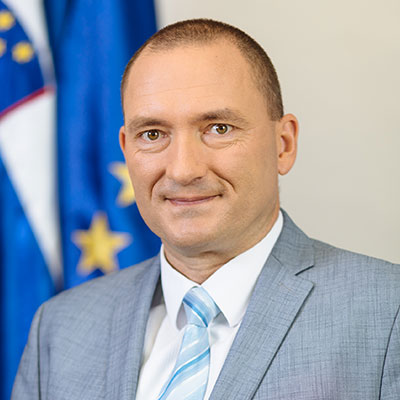 Minister, Ministry of Agriculture, Forestry and Food, Republic of Slovenia

Born in 1974 in a traditional farming family, and grew up on the family farm. He began his education at the Grm Secondary School of Agriculture and continued his studies at the Biotechnical Faculty, where he obtained his doctoral degree in agricultural economics. He began his professional career in the economic sector, where he became well acquainted with vegetable production and the vegetable cultivation sector in Slovenia. From 2004 to 2018 he was employed at Grm Novo Mesto – Centre for Biotechnics and Tourism (the former Grm School of Agriculture), where he became familiar with the functioning of the public sector. During his time at the school he headed a group for the reform of educational programs in agriculture, helped establish and subsequently became head of the Grm Inter-Company Educational Centre, helped establish the Grm Research and Development Institute and was head of this Institute until September 2018, headed a working group for the preparation of starting points for the establishment of the Grm Landscape Governance College in Novo Mesto, where he served as the first Dean with full powers until his appointment as State Secretary. In March 2015 he was appointed the first Food Supply Chain Relationships Ombudsman. In September 2018 he was appointed State Secretary at the Ministry of Agriculture, Forestry and Food, while in October 2020 he was appointed Minister.